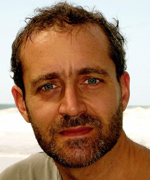 A cascade of awards flooded into faculty members in the Division of Physical Sciences, including the 2009 Walter P. Kistler Book Award, the 2009 American Chemical Society Award for Creative Work in Synthetic Organic Chemistry, the Francis M Award Pipkin of the American Physical Society and the Spring 2009 Hewlett-Packard Outstanding Junior Faculty Award.

The Foundation for the Future chose David Archer, professor of geophysical and college sciences, to receive the $ 10,000 Kistler Prize for The Long Thaw: How Humans Are Changing Earth’s Climate Over The Next 100,000 Years (Princeton University Press, 2008).

The American Physical Society honors Zheng-Tian Lu, senior physicist at the Argonne National Laboratory and part-time professor of physics at the University, for the outstanding achievements of young scientists in the fields of precision measurement and fundamental constants .

Archer will receive the Kistler Prize on Thursday, April 16 at the University of Washington. The award recognizes authors of scientific books who make a significant contribution to the public’s understanding of factors that may impact the long-term future of humanity.

In The Long Thaw, Archer discusses the implications of human-generated increases in the release of carbon dioxide into the atmosphere. “The benefits of using fossil fuels accumulate now and into the current century until the fuel runs out, while the costs will last for millennia,” he wrote.

Nature absorbs carbon dioxide about half as quickly as civilization releases it. This has already resulted in regional heat waves, stronger than normal hurricanes, droughts and other climate changes. Climate change severe enough to melt the ice caps “would reorganize the landscape and societies on Earth,” Archer wrote.

Yamamoto held positions at Kyoto University, University of Hawaii, and Nagoya University before assuming his current position in Chicago in 2002.

“Hisashi is internationally recognized as a truly creative and prolific scholar,” said Koichiro Oshima, professor of chemistry at Kyoto University and first student of Yamamoto. Indeed, Yamamoto has published more than 500 original articles, 65 of which were published after his move to Chicago.

The Pipkind Biennale cited Lu “for the development of techniques for laser cooling and trapping of rare and radioactive atomic species; and for applications of these techniques ranging from isotope trace analysis to fundamental symmetry testing.

Throughout his career, Lu has developed new techniques in laser manipulation and laser spectroscopy of atoms, applying these techniques to ultra-sensitive trace analysis, studying nuclear structure and testing fundamental symmetries.

For the development of the atomic trap analysis method, Lu received both the Presidential Early Career Award for Scientists and Engineers and the Early Career Scientist and Engineer Award from the Ministry of Energy in 2000. He became an elected member of the APS in 2006.

As the recipient of the Hewlett-Packard Outstanding Junior Faculty Award, Dinner will present his work at the American Chemical Society’s national meeting in August. His project is called “Improved Sampling Methods for Molecular Systems Far from Equilibrium”. Gene regulatory networks are an example of such a system.

The dinner has garnered four other accolades since joining Chicago faculty: an Alfred P. Sloan Fellowship in 2008, a National Science Foundation Career Award in 2006; a Searle Scholar Award in 2005 and a Dreyfus New Faculty Award in 2003.

– Editor’s note: This article includes an excerpt from Chemistry and Engineering News, January 26, 2009.